African Markets of the FUTURE 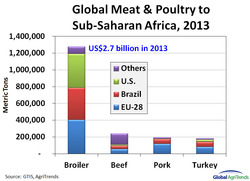 A newly released demographic research paper is altering thinking about how Africa, and African markets, are developing. Prior projections from the UN showed much of Africa fertility rates falling, but a new study indicates that fertility rates remain exceptionally high (5.1 to 6) in many of the best developing markets in Africa. This includes the nations of Nigeria, Ghana, Angola, Tanzania, Cameroon, the Ivory Coast and Senegal.

This significant population growth is troubling given that the African Development Bank stated in 2010 that only 25% of men and 10% of women were able to enter the formal economy before the age of 30. This new research indicates that the African population between the ages of 15 and 24 will expand from 200 million in 2010, to over 450 million by 2050.

What this means is that the stalled private investment and lack of employment outside of natural resource extraction will continue. In short, African markets may not be nearly as promising as the optimism which has taken hold over the last decade.

Yet, with an estimated 35 African cities to reach populations of over 5 million by 2050 (up from 3 cities today) basic food demand will continue and imports required unless significant local production and infrastructure changes are made.