Analysis - Record global beef prices - all roads lead to China as 'the tail wags the dog'. 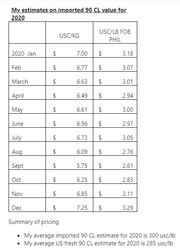 In the last week we have seen global beef prices go to new record price levels as protein supplies shorten everywhere - as I write this I almost have reluctance to put pricing down as these in certain markets are changing by the hour.

It seems the leaner the product is the higher the prices are going - a good example being Bull 95 CL which in mid-September was trading at 238-240 CIF into the US and two months later is now 40% higher at 335 CIF EC today - US importers are matching their counterparts in China.

Much of the rally I believe in the market is a direct result of African Swine Fever and the estimated 15-20 million tonne shortfall in China's pork production expected each year for the next 3-5 years - the recent price action of imported pork, beef, chicken and sheep meat is reflecting China's need to fill this protein void - as a result US importers and end users are needing to buy away from China in preparation for the northern summer.

In this paper I am sharing my thoughts on where imported 90 CL and US fresh 90's CL might end up in 2020 - I would ask you seek other peoples opinions and do your own research as these are only my own personal views - given the variables that exist both globally and within China forecasting is a precarious business at the moment.

The last record high was 2014 - how does this compare?

In 2014, we saw record highs at the time on lean meat - this was driven by a US supply shortage and strong demand - which was short lived with a 'short covering rally' which saw imported 90's rally to 303 usc/lb FOB Phil in August that year and imported 95 CL reach 320 FOB Phil - in the last 24 hours today's market has reached these levels on 95's and is likely to do the same on 90's - and it seems the upward momentum is not slowing down.

The key difference between then and today is that in 2014/15 the market corrected itself and by the end of 2015 imported 90's were 40% lower and trading below 200 usc/lb - what drove the market that year was historical low cattle inventories - in 2014 US feedlots took advantage of lower feed costs and held cattle back which drove prices even higher - and by 2015 a larger US herd inventory was occurring which ultimately saw falling cattle and meat prices later that year.

In 2014 the back end of the futures curve reflected this supply correction - in 2019 the market drivers are quite different which has led to these new record highs being achieved - namely strong global beef demand - in particular by China and its enormous protein deficit. The US April cattle futures are 6% higher than today's market - with the likelihood of strong global beef demand and high prices for the next 3-5 years - in other words this is a demand driven market that looks sustainable for many years to come.

'The tail is wagging the dog' - US imported prices is dragging up domestic prices - this trend is likely to continue.

The imported market in the US has been increasing at a rapid rate - since September in particular, imported 90's have risen more than 30% and a 45% rise over the year - suggesting most of the heavy lifting in price was in the last two months - this in turn has seen US domestic fresh 90's being 'dragged up' moving higher each day due to the lack of imported meat - in other words the lack of imported Australian and New Zealand meat is setting the US domestic price - its rare to see this but it has occasssionally occurred in the past when US beef imports are extremely low. This year New Zealand imports are likely to be close to 130,000 mt to the US - one of the lowest shipments in 20 years.

In 2010 and 2011, New Zealand shipments were also extremely low that saw imported 90 CL trade at a 7 and 8 usc/lb premium to domestic 90's in each respective year. It should be noted that the the long term trend for imported 90 CL against US fresh 90 CL is normally a 3.5 usc/lb discount. It does beg the question whether we ever see this again or has China's enormous lean meat needs changed the US market forever.

In 2020, I see volumes even less than this year - in 2019 imported 90's are on track to trade at an average of 12 usc/lb premium over domestic 90's and next year will see this widen further as New Zealand exports to the US fall further to an estimated 116,000 MT - resulting in I believe a 15-17 usc/lb premium for imported 90 CL over US fresh 90 CL. Once again the 'tail will wag the dog' as the lack of imported is likely to push domestic 90's higher again as we have seen this year.

How high can this global lean grinding meat market go?

Its a challenging question and one that I believe requires some lateral thinking - to me New Zealand is key to understanding the global lean meat market - given almost two thirds of New Zealand exports is lean and is being shipped as grinding meat or cuts globally.

We have seen in the last 12 months China dominating New Zealand's beef exports with close to 55% of total beef exports going there (up 133% from August 2018), namely at the expense of the US which in August only had 19% market share (down 35% on last August).

So when assessing the role that China has played in New Zealand exports I looked at the last 4 years of export data and focused on the average USD/kg price and looked for seasonality in price movement - which I am glad to say exists.

The other critical relationship is US imported 90 CL prices again China/NZ export values - with a delayed affect in pricing as the US market has played catch up with China on owning meat for all of 2019. There is a 3 month delay in the data from New Zealand but I think what is important is the understanding that every October the 'reset' pricing button is set on global grinding meat as China commences its 3 month buying program for Chinese New Year.

Whatever the peak in pricing is for December this I believe will set the pricing agenda for the following 9 months in 2020 - following the seasonal trends outlined below. Come October 2020, then the next 'reset pricing button' is pressed for Chinese New Year in 2021 and the cycle repeats itself.

As stated, wherever this years December imported 90's price ends up will determine I believe the pricing structure for the Jan-Sept, 9 month period next year - followed by the Q4 reset button and 2021 buying Chinese New Year buying program.

Other points to note

Words of caution from within China

I am starting to hear some words of warning from within China on what the market may do in late November and December.

My forecasts on where pricing could be on imported 90 CL this year is based on the assumption that New Zealand's seasonality trends hold - and this is a big assumption given the belief that China's pork deficit will be potentially 15-20 M tonnes.

The purpose of giving my view is to try and put both words and numbers around some of the extraordinary price movements we have seen since September this year and make sense of them - I would like to point out these are personal views only and that I would recommend that individuals do their own research and seek other opinions before making decisions.

The words of warning from within China I believe are very prudent and should not be taken lightly - given the lofty highs of this market I cannot help to think we are closer to the top of the market than we are to the bottom and therefore there is potentially a large amount of downside risk.

Any feedback would be appreciated.