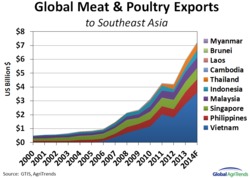 The Association of South East Asian Nations (ASEAN) is scheduled to formally launch the ASEAN Economic Community (AEC) on January 1, 2016 (yes 2016, we take a forward-view). The AEC is to be the first step to achieve full regional economic and financial integration among the 10 member nations: Brunei, Cambodia, Indonesia, Laos, Malaysia, Myanmar, the Philippines, Singapore, Thailand and Vietnam. Some have called it the ASEAN’s version of the European Common Market. When the AEC comes into being in 2016, it would stand as the world’s eighth largest economy with a total population of 610 million people. Although the AEC is a year away, ASEAN members and their meat and poultry suppliers need to watch for creeping protectionism beginning in 2015.

This agreement will alter some tariff rates on meat and poultry traded between most if not all ASEAN nations, and strives to harmonize SPS measures.This later goal is likely to be difficult to achieve in meat and poultry. For example, with zero tariffs on meat and poultry between ASEAN members, will poultry from Thailand start to flow in greater quantities to the less competitive Philippines, Myanmar, Cambodia and possibly Indonesia? Will Thailand and Vietnam sell more pork into nations which have higher production costs such as the Philippines, Laos and Myanmar? Will some nations with relatively low import tariffs on US pork (or other nations which they have an FTA with) import meat for further processing and then re-export to other ASEAN nations at a zero tariff – possibly increasing demand for US pork?

Scenarios as the ones above may force the less competitive markets to implement SPS constraints to limit imports. Nations may also implement Technical Barriers to Trade (TBT) such as restrictive labeling, shelf-life and storage requirements. Facing political pressure from local industries, each country may also declare beef, pork or poultry as “sensitive products” to try and stem importation.

Many ASEAN nations are yet to address how the AEC will alter its agricultural production and trade. Exporters to the region have also not yet detailed what impacts there may be on trade flows and product mix. But this integration and possible new regulations are areas to watch throughout the coming year.