The Biggest Beef Importer on Earth 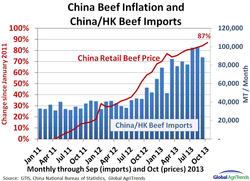 For years, the U.S. has been the largest beef importer on the planet, due mainly to the need for fast-food grinding beef. However, last fall a seismic shift occurred: Chinese beef inflation rapidly moved China from the #4 beef importer to #1; and it happened in 8 months. Today the greater China region (China+ H. Kong) is the #1 importer of beef globally. And the growth is not over yet.

China and Hong Kong’s combined July imports of beef and beef variety meats topped 99,428 metric tons (219 million pounds) valued at over $390 million dollars. U.S. shipments of beef and variety meats to China and Hong Kong in July topped $88 million (23% of the total). China’s 1.3 billion-population-potential to shift global consumer demand has occurred in waves. Soybeans rode a wave, beginning in 1999 and rising to 18-fold to 2012. Today China imports 22% of the world’s soybeans. Another Chinese wave of imports began with rising demand for industrial commodities beginning in 2009. And now it is beef’s turn to ride the China wave. However, there is a major difference for beef: global beef supplies have been steady/lower nearly each of the past 6 years. The rise of a MASSIVE customer in the face of tight supplies will spur prices higher and create a global bidding war for beef. While analysts and media have focused on cracks in the foundation of China’s economy, growth continues on a strong pace. The IMF forecasts Chinese economic growth at 7.8% for 2013 and 7.7% for 2014. Very recently investment banks including Goldman Sachs reported that China’s economy is recovering. And, China’s middle class, estimated at 230 million in 2012, is expected to nearly triple to 630 million over the next 10 years (CUSEF study). So what does this mean for global and U.S. beef markets? Tightening supplies and higher prices. U.S. beef shipments to Hong Kong are up +102% YTD (nearly the same volume as Mexico) and will continue to grow. Chinese RETAIL beef inflation is up 83% since January 2011 and shows no sign of cooling. And while China continues to ban U.S. beef (since the 2003 BSE case), large shipments will continue to access H. Kong. Thus far through 2013, 78% of beef shipped to China and H. Kong has originated in the Southern Hemisphere (Brazil, Australia, Uruguay, N. Zealand, Argentina, and Paraguay). Only 11% of the 2013 market is from the U.S. However, here is the larger, yet indirect impact: the strong Chinese demand for Australian/N.Z. beef will limit U.S. beef imports in 2014, likely sending 90% grinding beef prices (and cull cows) to record highs.