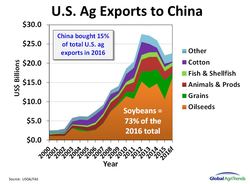 Trump's hot rhetoric against China is raising trade friction. Will it be in a good way or bad? Too soon to tell. But in the meantime, it's important to understand the agriculture trade relationship with China; what China needs, and what China does not.

China manufactures much of what we buy and use each day. These goods are not only manufactured by U.S. companies in China, but also by Chinese companies. “Made in China” has become the motto of global consumerism.

President-elect Trump’s hot rhetoric against China has raised concerns over U.S - China trade (agriculture and non-agriculture). He claims that we have been out-traded by China; that they have intentionally weakened their currency as a means to fuel exports. That argument is likely true. And it can be made of other key Asian countries in the past including Japan and Korea. Another Trumpism has been the call for U.S. companies to move manufacturing back to the U.S. Some of that can happen, some cannot. Some low-tech manufacturing will never be competitive in the U.S. But other jobs may, especially if Chinese products face a 35% duty to enter the U.S. market. These will be key battles in the new administration. And China may retaliate.

But what about U.S. agriculture trade with China? The best way to explain this is that we have a bi-polar co-dependent, complicated relationship. We face not only agriculture issues, but cyberhacking issues, intellectual property theft, and military friction over global shipping lanes. Agriculture is not on the top half of key national priorities with China.

However, China needs U.S. soybeans, both in quantity and as a market wedge against Brazil (73% of U.S. ag exports to China in 2016 were soybeans). But China doesn’t need much else. While the U.S. shipped $16.2 billion worth of soybeans last year, they also shipped roughly US$5.87 billion in non-soybean, agriculture exports to China last year, mostly grains and pork. But these other exports have faced challenges and trade restrictions.

The bottom line is this: Outside of soybeans, China doesn’t NEED U.S. agriculture. They buy some products, but mostly restrict U.S. agriculture. They are 95% self-sufficient in pork, and higher in most key commodities. They buy no U.S. chicken (HPAI bans from 2015), no U.S. beef since U.S. BSE (mad cow disease) bans from 2003, they restrict most U.S. pork over ractopamine, a globally-approved (via Codex) feed compound, and they restrict U.S. corn, DDGs, and ethanol through a variety of means, mostly punitive duties. One need not read the tea leaves too deeply to realize, China does not want U.S. agriculture (except soybeans). Or - they restrict these products for leverage in future negotiations. China has opened access to a wide range of global meat/poultry suppliers including European nations and Brazil. Those two have benefited the most through China's 2016 pork gap, as well as supplying beef and poultry in the absence of the U.S.

U.S. farmers have long dreamed of the potential of China’s billion-plus consumers, but the reality is, outside of soybeans, they have gotten very little. The U.S. cast a key vote to allow China into the WTO in 2001. But since then China has walked all over key obligations.

As you watch these negotiations move forward consider my theory: All Chinese policies revolve around social stability; and food security is important to social stability. With a caloric self-sufficiency ratio near 100%, China is too big to survive off of imported agriculture commodities. They process 6x U.S. hog slaughter. China’s agriculture markets must remain profitable to keep farmers farming, even if subsidies are required. China's farming costs are far higher than the U.S. Note their market prices: last week in China, corn was the equivalent of US$5.98/bu (+79% above the US price); Chinese hogs (live) were US$116/cwt, a full 146% above the U.S. prices. But food security is paramount. Economics take a back seat to national strategic priorities (social stability and food security). China must keep their farmers farming; 1.3 billion lives are at stake. So agriculture imports into China, while partially-allowed, will not be freely liberalized.

So bring on a tough discussion with China on U.S. agriculture trade. As we mow through our flood of Amazon boxes filled with Chinese goods, U.S. trade officials have been arguing about the safety (?) of U.S. beef with China for over a decade. But tread carefully. While U.S. agriculture trade has not received much Chinese love, the flood of cheap Chinese goods to the U.S. at a 35% duty could feel like a significant tax hike for millions of Americans.