Why Japan Matters to U.S. Pork 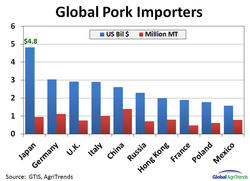 Japan is one of the largest pork importers on earth, buying just under 1 million metric tons in 2013. However in terms of total dollar value pork imports, they are a solid #1 at $4.8 billion in 2013. #2 Germany was at US$2.9 billion.
Last year, Japan imported 48% of their entire national pork consumption. And 41% of that pork came from the U.S. The U.S. has been the dominant pork supplier to Japan for over a decade.

Pork trade with Japan is complicated and protected. Japan utilizes a variable-levy system (also known as a gate price system) for importing pork. The gate price is set at 524 yen/kg (US$2.31/lb today). Any pork that clears customs in Japan below that price, pays not only the 4.3% pork duty, but also pays the differential between the import price and the gate price. This system is designed to allow a “protected” high-value wholesale pork market in Japan. The result is that nearly all pork clears customs in Japan at or very near the gate price. This is a great incentive to ship high-valued pork, and thus, Japan is the highest value pork importer on earth. Japan imported US$1.9 billion of pork (422,000 metric tons) in 2013 with import prices averaging near the gate price.
This chart shows Japan’s retail pork loin prices for March 2014 for both imported and domestic. You can also see the U.S. wholesale loin price at US$2.82. Due to the PED virus and expected tight supplies, U.S. loin prices are up +78% from a year ago and are now above Japan’s gate price equivalent, a rare event. So discussions of liberalizing the Japanese pork market for U.S. pork holds enormous appeal. Various scenarios are likely being considered. The variable levy system could dismantled, altered, or left in place. Removing the gate price system altogether would remove the protective barriers around the inflated Japanese wholesale price and let U.S. pork be much more price competitive vis-à-vis Japanese pork. However, it could remove the blending incentive for Japanese importers to buy higher-value cuts to get them closer to the gate price. The gate price could be also gradually lowered until the market becomes liberalized. Or it could be scrapped altogether and replaced with a declining duty rate. It appears the most recent round of talks between President Obama and Japanese Prime Minister Shinzo Abe led to limited results.
Keep an eye on these talks moving forward. Meaningful access revisions for U.S. pork to Japan would be significant, allowing Japan’s 140 million people access to much cheaper retail pork prices.